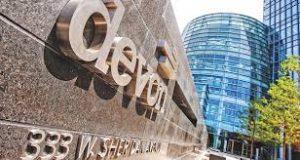 Oklahoma City’s Devon Energy was one of those oil and gas companies hit by the latest energy attack of the new Biden administration.

The administration temporarily suspended oil and gas permitting on federal lands and waters. The move was described as the latest Biden effort to fight climate change and target the fossil fuel industry.

In Devon’s case, it was just a week ago, as reported by OK Energy Today, that Devon had developed a 500-permit insurance policy on its federal Delaware Basin leases. The large inventory would give assurances to the company to keep it active for several coming years.

Company leadership remained positive about the news according to Reuters which quoted Executive Chairman Dave Hager as saying, “We have always been very confident that we will continue to develop and drill on federal acreage… It’s embedded into the rights we have in the leases.”

Devon is believed to be the largest oil producer on federal lands in the lower 48 states. The company estimated that it has at least four more years of drilling permits.

Under the 60-day suspension of approvals by the Department of Interior,  producers like Devon who hold unused drilling permits will be allowed to continue drilling wells. There is an estimated 5,600 such permits.