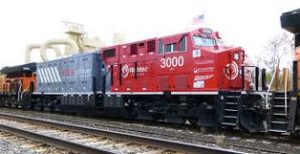 BNSF Railway company has joined Wabtec in exploring the development of the trains of the future…battery-electric locomotives rather than those running on diesel fuel.

The Fort Worth, Texas-based railway said testing got underway this week on a battery-electric locomotive that runs between Barstow and Stockton, California. The firm said it is exploring battery powered trains as a means to “further reduce its environmental impact.”

“We’ve got everything in place and we’re ready to see how this next-generation locomotive performs in revenue service,” said John Lovenburg, BNSF vice president, Environmental.

He explained the tests will have the battery-powered locomotive situated between two other locomotives in a hybrid fashion. When running on the mainline, both the battery-electric and diesel locomotives will power the train. 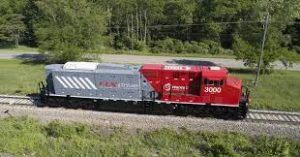 The pilot test will run from January to the end of March and if successful, BNSF intends to investigate testing at other locations. Who knows? Some of the electric-powered locomotives might find their way into Oklahoma where BNSF has extensive rail service.

BNSF partnered with Wabtec on the development of the battery-electric locomotive, which features an overall energy-management system, including onboard energy storage that, when coupled with advanced system-optimization controls, will improve consist and train performance.

The battery-electric locomotive pilot program is part of a $22.6 million grant awarded to BNSF and the San Joaquin Valley Air Pollution Control District from the Zero- and Near Zero-Emission Freight Facilities project by the California Air Resource Board to pilot several emissions-reducing technologies in and around railyards.