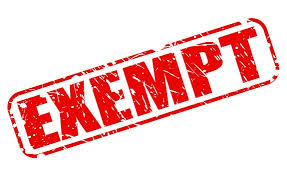 The Department of Interior came out this week with an announcement that Native American tribes are exempt from the temporary suspension reported Reuters.