While President Biden effectively eliminated the Canada-to-US Keystone Xl pipeline, another oil and gas industry pipeline is in the works to carry carbon dioxide across Wyoming. But this one is a carbon-capture line.

Supporters describe it as the largest such network approved in North America—that is, if it is developed and not opposed by environmentalists or killed by the Biden administration. The Bureau of Land Management in the Trump administration approved some 1,100 miles of federal land through the Wyoming Pipeline Corridor Initiative.

The U.S. government recently gave approval of the project to capture greenhouse gases from coal-fired power plants. Approval came before Joe Biden became president and immediately set out to target the fossil fuel industry. But now companies can start submitting proposals to construct the pipeline.

“The ability to have a CO2 delivery system, as made possible by the pipeline corridor initiative, helps make CO2 commercially viable,” Gordon said in a statement. 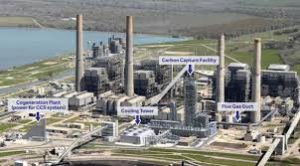 Texas already has such a carbon capture project designed for oil production and captures the CO2 from a coal-fired power plant. However, the Petra Nova facility has been offline since last year when oil prices dropped to drastic levels.

Another carbon capture project is in Canada and near the border with North Dakota.