100 years since oil was discovered in El Dorado, Arkansas 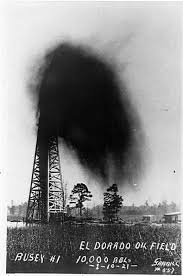 The century mark was hit this week when oil was discovered in the southern Arkansas city of El Dorado eventually making it the oil capital of the state.

The well was drilled on Jan. 10, 1921 and a day later, a geyser of oil forced workers to scramble for cover.

Click here for more of the history from Arkansas online.