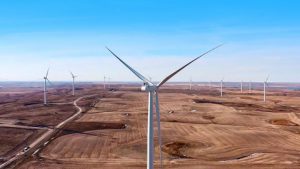 EDF Renewables, a San Diego based company that already put wind and solar projects in Oklahoma into operation announced the start of commercial operations of its latest project in North Dakota.

The $260 millon project is about 10 miles southwest of Kulm, North Dakota in McIntosh and Dickey Counties. It consists of 75 Vestas wind turbines that can generate enough energy to power 65,000 homes a year.

EDF Renewables is one of the largest renewable energy developers in North America with 16 gigawatts of wind, solar, and storage projects developed throughout the U.S., Canada, and Mexico.

It built and managed Great Western Wind in western Oklahoma, a project in Woodward and Ellis Counties that powers the Google Data center in Pryor;  Slate Creek Wind on the Kansas border and Mustang Solar, a solar farm located at OGE’s Mustang Power center in Oklahoma City.