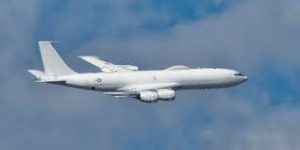 Dozens of employees of a civilian company whose support contract for the Navy’s E-6  Mercury program at Tinker Air Force Base in Oklahoma City are about to lose their jobs in the coming month.

A WARN notice for 63 employees of IAP Worldwide Services was filed this week with the Oklahoma Office of Workforce Development indicating the layoffs will be permanent.

Bill Hancock, the Business Services & Rapid Response Coordinator in the office said the layoffs will be effective Jan. 31, 2021. The notice indicated that IAP’s contract to support the E6-B Mercury flying communications posts expires on that date.

IAP apparently lost the contract which will be taken over by Vertex Aerospace, according to the notice. The layoffs will occur at two IAP facilities at Tinker AFB. The company also said it will lay off workers at some of its operations at Travis Air Force base in California, Offutt Air Force Base in Nebraska and IAP facilities in Maryland.

The E-6 Mercury has a principle mission of connecting the national command authority with the U.S. Navy’s nuclear missile force carried aboard at-sea ballistic missile submarines.