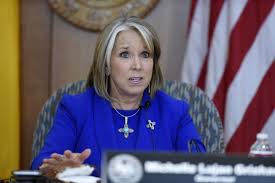 The network quoted sources for its late afternoon report. Earlier, there had been broadcast and published reports, including by Fox News that Gov. Grisham was being considered to lead the Health and Human Services department.

It is unknown if she is still being considered for the position. However, POLITICO reported that controversies from the governor’s background in the New Mexico Department of Health might be a roadblock. Republicans could raise those controversies as a way to block her appointment in the U.S. Senate.

The controversy stems from Grisham’s profiting off New Mexico’s high-risk insurance pool while she was in Congress.

POLITICO explained that ObamaCare was intended to eliminate such insurance programs but New Mexico continued using it for seriously ill patients. A firm created by Grisham and her former campaign treasurer State Rep. Debra Armstrong won a contract to run the pool in 2009 and it received millions to operate it.