The $132 million sale of Blueknight Energy Partners holdings in the Cushing crude oil storage facility is no small deal for Canadian buyer Enbridge Inc. It turns Enbridge into an even stronger crude oil delivery company in the world. 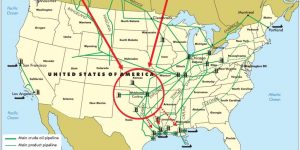 Enbridge was already the second largest storage operation at Cushing and energy observers say this week’s deal with Blueknight will give the Canadian company a definite competitive advantage. It will also provide Enbridge with more connectivity to producers in several basins across the U.S.

Enbridge, headquartered in Calgary, Alberta is noted to have one of the longest crude and liquids pipeline systems in the world. It spreads across 17,127 miles

Blueknight’s sale and Enbridge’s acquisition won’t be finalized until sometime in the coming spring.