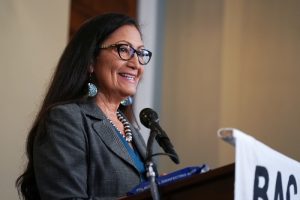 POLITICO reported the process started on Tuesday following reports that the clean energy advocate and member of the Pueblo of Laguna tribe in New Mexico would be a possible candidate for the position.

A year ago, Rep. Haaland introduced the 100% Clean Economy Act of 2019 to take the lead to a renewable energy transition in her home state. The bill set a nationwide goal of achieving a 100% clean energy economy by 2050 by reaching net-zero climate pollution across all sectors of the U.S. economy.

The Interior Department oversees government relations with Native American tribes including those throughout Oklahoma.