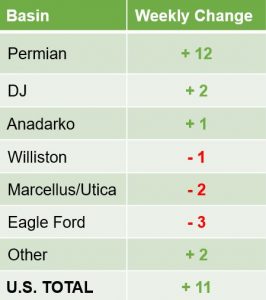 The latest rig count supplied by Enverus, the Austin, Texas-based data analytics firm showed an increase of 11 active rigs nationally in the past week.

The report showed a total of 381 oil and gas rigs in operation across the U.S. as of Nov. 18. Enverus stated that the rig count jumped 16% in the past month but remains down 54% compared to one year ago.

“The most notable change in the last week was a 12-rig jump in the Permian Basin to 164, with the Midland Basin accounting for nine of those added rigs at 74,” stated the Enverus report.

Pioneer Natural Resources ramped up in the Midland, adding two rigs and bringing its total to 10 in the last week after averaging seven from May through mid-October.

Month over month, the largest increases by major basin were in the Permian (up 31) and Gulf Coast (up nine). Since those two areas have been discussed in prior weeks as their upward trend continues, the focus this week will be on less-active basins with meaningful increases.

At one point this year, the rig count fell to zero in the Powder River Basin. As of Nov. 18, there are six rigs running there, up by three in the last month. Ballard Petroleum, Cardinal Oil, EOG Resources, Impaction Exploration & Production, Samson Resources and True Oil are each running one rig.

The DJ Basin in Colorado saw a month-over-month gain of four rigs for a Nov. 18 total of nine. After a five-month hiatus, Occidental Petroleum added a rig in mid-September and has now ramped to two. Seven other operators are each running one rig in the basin, including PDC Energy, Mallard Exploration and Chevron.

The most dramatic percentage increase in the last month, 700%, was in the Salina Basin in Kansas. From just one rig working a month ago, activity has ramped up to eight rigs running in the basin, each by a different private operator.

In contrast to these increases, Appalachia dropped five rigs in the last month to 31 rigs. Some of the basin’s biggest names dropped multiple rigs: EQT (down four to one), Chesapeake Energy (down three to three) and Range Resources (down two to one).