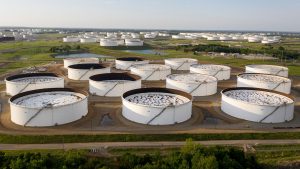 Considered the pipeline crossroads of the world, the Cushing crude oil tank farm is filling up again close to the levels it reached in May when oil prices not only crashed, but crashed hard.

Stockpiles reached 61.6 million barrels as of Nov. 16 which represents about 81% of capacity at the delivery point for West Texas Intermediate futures. The most recent U.S. government data showed Cushing is only about 3.83 million barrels short of the levels it reached in May.

What brought about the recent surge in crude at Cushing? COVID-19 and the concern about the impact it is having on the  demand for gasoline as Americans are not driving, is one large explanation. And lockdown measures suggested by President-elect Biden and governors of some states has added to the worries about the effect it will have on oil prices.

For instance, the Energy Information Administration reported that gasoline demand dropped nearly 500,000 barrels a day last week. That represented the largest week-over-week decline since May, the same time when Cushing’s crude tank farm was filled to the brim. 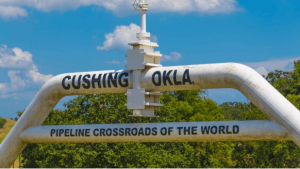 As Bloomberg recently reported, such pandemic worries might result in traders looking for any place to store oil. Indeed, the news agency reported that some are already taking such steps, thus, the resulting increase in crude stored in Cushing.

“Even as those facilities come back online, we are seeing excess inflows into Cushing overshadowing increased demand,” said Hillary Stevenson, a research director at Wood Mackenzie Ltd, reported Bloomberg.

Here’s another reason why there is increased storage at Cushing. West Texas Intermediate crude has been in contango—in other words, the close-at-hand crude futures contracts are actually cheaper than those dated in months down the road. As a result, traders could actually store their crude in Cushing and sell it much later at a profit.