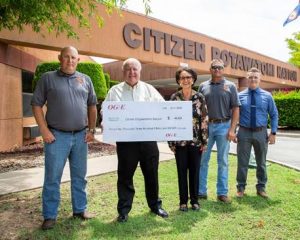 A collaboration between Citizen Potawatomi Nation (CPN) Electrical Services and Hunzicker Brothers Electric netted the Tribe more than $90,000 in rebates from OGE Corp.

Tribal executives received the second of OGE’s payments in person for the FireLake Parking Lot Lighting Project in late July. “The Nation has long prided itself on using the most efficient ways of putting our resources to good use,” said Tribal Chairman John “Rocky” Barrett. “This project is a perfect example of finding a way to shine the best light possible on some of our most important commercial enterprises while being good stewards of our funds.”

Cooper Drive and Hardesty Road, including FireLake Discount Foods, FireLake Arena, FireLake Entertainment Center and FireLake Ball Fields. Under the supervision of CPN Electrical Director Justin Whitecotton, electricians Mathew Irving and Caleb Colvin replaced all of the fixtures supplied by Hunzicker Brothers Electrical Distributors. The aim was to lower energy use, thus saving on costs while improving the quality of light.

They switched out older 9- to 10-foot candles holding metal halide 1,000- watt bulbs with newer, more energy efficient 13- to 14-foot candles mounted with LED lights. Those lights use an average of 300 watts of electricity.

Whitecotton said that operating the older lights cost the Tribe nearly $60,000 annually. With the new 13- to 14-foot LED fixtures, that total is down to around $19,000 per year. Savings amount to more than kilowatts per hour for the nation though. Technological improvements in lighting mean the new LED fixtures produce much higher quality light and require almost no maintenance.

Whitecotton said that saves the Tribe another $15,000 in annual costs it would normally

put toward maintaining the old fixtures. He cited his great working relationship with Braden Teeman at Hunzicker Brothers with the help of CLEAResult on similar projects. They totaled more than $200,000 in rebates for the Tribe in the past year.

“We have worked closely with Justin to try and get every job we can on the rebate program that pays back the most money,” Teeman said. “I hope we can continue to work closely with the Tribe to keep saving them money and get everything switched over to LED.”

While the long-term impact for the Tribe is financial savings, the utility provider also secures benefits as it upgrades its infrastructure and equipment for large commercial entities like the nation. To learn more about the project, visit cpn.news/firelight.