Hamm—election of Biden will mean $6 a gallon gasoline 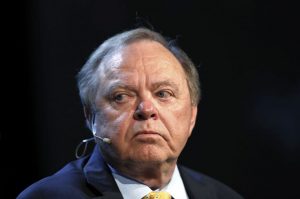 Joe Biden’s plans for discouraging the use of fossil fuels would “plunge America back in a depression” and could drive gasoline prices to $6 per gallon, billionaire oilman Harold Hamm said Thursday, well beyond any level previously recorded.

Hamm, a confidant of President Donald Trump and the chairman of Oklahoma-based Continental Resources Inc., made the prediction — which appears to go well past other analysts’ views — in an interview with Bloomberg News hours before the final presidential debate. Energy politics and a fight over fracking and climate change have emerged as major issues in the election.

Biden has outlined a $2 trillion climate plan to promote renewable energy and rapidly remake the generation of electricity in the U.S. so that it doesn’t produce greenhouse gas emissions. The Democratic presidential nominee said he has no plans for a widespread ban on the fracking process used to coax oil and gas out of some 95% of U.S. wells. But Biden has said he would halt issuing permits for oil and gas projects on federal lands that last year delivered 24% of U.S. crude supplies.

A Biden campaign spokesman did not immediately respond to emailed requests for comment. Supporters of Biden’s plans argue they are necessary to pare greenhouse gas emissions and fight climate change, ultimately helping drive a cleaner and more affordable energy future.

Hamm’s gasoline prediction would hinge on a significant surge in crude prices, well above their current lows. Average retail gasoline prices have only shot past $4 per gallon once in the past three decades, according to Energy Department data.

But analysts say Biden’s policies discouraging oil production would boost prices for crude and the gasoline made from it.

Kevin Book, managing director of research firm ClearView Energy Partners, said Biden’s proposed policies would drive higher gasoline prices, though the degree of that increase would depend on what got imposed. Even a federal leasing ban would mean “a modest price increase,” with broader nationwide curbs meaning at least a 60-cent increase, he said in a separate interview.

“We can quibble about whether it’s $6 or $4 per gallon, but the point is it’s higher than anyone wants to pay, right now especially,” Book said.

Biden’s plans would have uneven impacts within the oil and gas sector, particularly hurting companies with significant investments on federal land. Other producers, such as Pioneer Natural Resources Co. and Hamm’s Continental Resources, which do not have federal oil leases, might see their holdings swell in value.

“It could go both ways for Continental with our reserves — eventually those reserves could be worth a lot more money in a scarcity situation,” Hamm said. “But what’s at risk is the country itself,” and an increase in oil prices is “bad for America.”

Any potential industry gains from a boost in crude prices could be offset by higher operating costs for oil companies subject to greater regulation, warned Bud Brigham, the chairman of Brigham Minerals Inc and founder of Brigham Exploration Co.

“Prices are higher, but your costs to operate are so much higher that it can squeeze your margins from both sides,” said Brigham, who joined Hamm in the interview. “If we had an administration that came in and put the hammer down on us while we’re down I’m concerned that we’d have a viable oil and gas industry on the other side of this pandemic.”