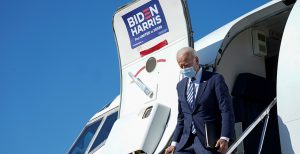 When Joe Biden rolled out his campaign’s environmental policies in June 2019, he said Americans need to take “drastic action right now to address the climate disaster facing our nation and the world.”

But the Democratic presidential nominee is taking half-measures to offset the planet-warming carbon dioxide emissions produced by his campaign for president.

Biden, who has made climate change a centerpiece of his effort to defeat President Trump, pledged last year to offset his campaign’s carbon dioxide emissions by funding programs that reduce global greenhouse gases.