Barrett on the bench—set to hear energy cases 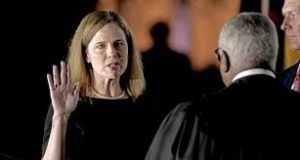 After being confirmed to the Supreme Court by the U.S. Senate Monday night on a 52-48 vote, Justice Amy Coney Barrett will leap right into cases involving the environment and energy, not to mention the more controversial Affordable Care Act, better known as Obamacare.

She received the support of Oklahoma U.S. Sens. Jim Inhofe and James Lankford. Sen. Lankford was among the handful of senators on hand for Barrett’s swearing-in ceremony held at the White House immediately following the confirmation vote during which some Democrats, in disgust, stormed out of the Senate chambers.

“Judge Barrett is a jurist, a scholar, a mother, a wife, a mentor, and a great example for young women and legal minds in our nation. She understands that there is no such thing as a Republican judge or a Democrat judge, but independent jurists who are separate from the political branches of our government. She is committed to being a fair justice who will uphold and follow the law, not her personal preference,” said Sen. Lankford.

Earlier in the day, he condemned Democrats for their smear campaign against Judge Barrett.

Sen. Inhofe tweeted his support of her following the confirmation.

“I cannot think of a better individual to fill this seat and tonight my Senate colleagues agreed by confirming Judge Amy Coney Barrett. What a historic day.”

This coming Monday, the court is slated to hear arguments in a wonky case over whether certain Fish and Wildlife Service documents from an endangered species review of a draft Obama-era EPA rule must be released under the Freedom of Information Act.

Later in the term, the court will take up a question about whether state-law climate lawsuits can be removed to federal courts, where they’re likely to be blocked. 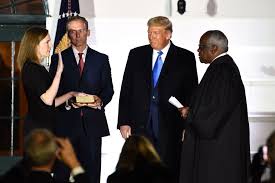 And the high court is waiting to hear the Justice Department’s thoughts on two additional cases before deciding whether to hear them; one is a fight between Wyoming, Montana and Washington state over coal exports, and the other will decide the future of the PennEast gas pipeline in New Jersey.

Barrett raised eyebrows during her confirmation hearings this month when she dodged Democrats’ questions on climate change science, saying at first she had not studied the science but that it was irrelevant to her judgeship, then later describing the issue as “a very contentious matter on public debate” that she would not address further. None of that impeded her from being confirmed and quickly sworn in on Monday.