Barrett doubles down on climate response under Democrats’ questions 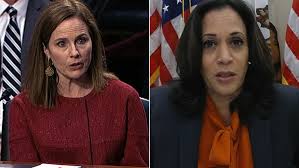 Judge Amy Coney Barrett told senators Wednesday that her views on climate change weren’t relevant to her potential role on the Supreme Court.

“I don’t think my views on global warming or climate change are relevant to the job I would do as a judge, nor do I feel like I have views that are informed enough, and I haven’t studied scientific data,” Barrett said in response to Sen. Richard Blumenthal (D-Conn.), who asked whether she believed humans cause global warming reported POLITICO.

Later Wednesday, Sen. Kamala Harris (D-Calif.) asked Barrett whether she accepted that Covid-19 is infectious and smoking causes cancer. Barrett agreed with both.

When Harris then asked her if she also believed climate change was happening and is threatening air and water, Barrett said: “You have asked me a series of questions that are completely uncontroversial … and then trying to analogize that to eliciting an opinion … from me that is on a very contentious matter on public debate and I will not do that.”

Harris shot back: “You’ve made your point clear that you believe it’s a debatable point.”

Greens have pounced on the comments as a matter of scientific fact, not debate. “If someone is unable to accept science, then they’ve proven they’re unable to serve on the Supreme Court,” Courtney Hight, the Sierra Club’s democracy program director, told ME. Earlier this month, the Supreme Court said it would hear an appeal from oil companies aiming to quash a lawsuit seeking compensation for damages from climate change.