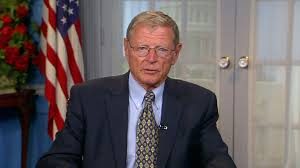 While Oklahoma U.S. Sen. Jim Inhofe finds himself in a re-election fight, he opened another battle in the past week—one with the U.S. Energy Energy department.

As the Tulsa World reported this week, it has to do with the control of the nation’s nuclear arsenal and its future development.

At the center of the fight is the National Nuclear Security Administration, which is nominally part of the Department of Energy but is responsible for security and testing of nuclear weapons used by the Department of Defense. The Senate Energy and Armed Services committees both have oversight responsibilities.

In that capacity, it is advised by the DoD’s National Weapons Council.

Inhofe strongly supports nuclear modernization and just as strongly opposes surrendering control of it to the Department of Energy.

“It’s not surprising that opponents of nuclear weapons support these efforts — it’s what you’d expect them to do,” Inhofe said, according to Defense News. “What bothers me is that people who should be doing all they can to support the critical work of the NNSA are instead trying to undermine it. As chairman of this committee, I won’t stand idly by and allow this to happen.”

Top ArticlesLeg warmers to Lululemon: How workout outfits havechanged over the years