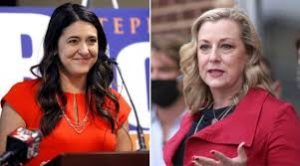 The reelection of Oklahoma Democrat Rep. Kendra Horn is reported to be one emphasized by the national Democratic party. A review of campaign contributions, based on records with the Federal Election Commission show Horn, who is seeking at second term as the fifth district representative has outraised Republican state Rep. Stephanie Bice by a nearly three to one margin.

Horn, a member of the House Committee on Science, Space and Technology received contributions from a long list of energy-related groups including the American Wind Energy Association, the League of Conservation Voters Action Fund, the United Mine Workers, the American Chemistry Council, Individuals Dedicated to Ethics and Science, and the National Air Traffic Controllers Association.

Records show how important Rep. Horn’s reelection is to the Democratic party for they show she has received at least $23,000 from Problem Solver Democrats, $38,350 from Hold the House Victory Fund and $167,000 from ACT Blue, a non-profit group dedicated to raising money for Democrats.