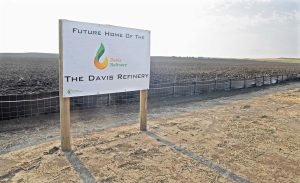 The North Dakota Supreme Court rule that state regulators properly refrained from getting involved in the location of an oil refinery being developed near Theodore Roosevelt National Park.

It’s the second time this summer that justices have sided with the state in a dispute over the Davis Refinery — essentially handing two legal victories to developer Meridian Energy Group reported the Bismarck Tribune.

The Public Service Commission in 2018 declined to review whether the refinery could be built just 3 miles from the park in the western Badlands, concluding the facility would be too small to warrant review under state law.

The law requires only those oil refineries with a capacity of 50,000 or more barrels daily to obtain a site permit from the commission. Meridian initially said the refinery would have a capacity of 55,000 barrels, but as the project evolved, the company lowered the figure to 49,500 barrels daily. CEO William Prentice signed an affidavit saying there were no plans to expand beyond that figure.

Environmental groups questioned whether Meridian is being forthright about the refinery’s size and is trying to skirt state law, and they sought a hearing before the PSC on the matter but were denied. South Central District Judge Bruce Romanick in May 2019 upheld that decision, and the Supreme Court in a 4-1 vote Tuesday affirmed Romanick’s ruling.