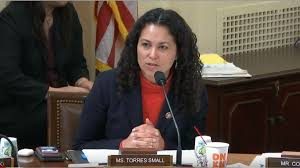 Republicans have released another attack ad on Democratic U.S. Rep. Xochitl Torres Small in New Mexico’s southern district even as she earns support from a traditionally conservative-leaning group. Even as she claims to oppose the Green New Deal and Democrat calls to ban fracking.

The National Republican Congressional Committee this week unveiled a new commercial blasting the Las Cruces Democrat’s pledge to “work with anyone” while taking $175,000 in campaign contributions from what the committee calls radical environmental organizations reported the Associated Press.

“Their socialist Green New Deal would kill New Mexico jobs,” says a voice in the ad while showing pictures of Torres Small next to images of Democratic U.S. Rep. Alexandria Ocasio-Cortez of New York and U.S. Sen. Bernard Sanders of Vermont.

Torres Small has said she opposes the Green New Deal and has angered some in her own party for refusing to endorse the resolution. She also told the Albuquerque Journal earlier this year that she has “consistently opposed a fracking ban” because of the effects it would have on New Mexico’s public education funding system due to lost revenue from drilling.