Navistar International announced this week it intends to produce electric heavy-duty trucks at the truck plant under construction in San Antonio, Texas.

Construction of Navistar International’s South Side plant just started in July, but the manufacturer already is shaking up plans for the $250 million facility: It will produce electric heavy-duty trucks in addition to the traditional diesel kind.

The shift comes as the Illinois-based company increases its bet that roads will teem with electric and autonomous vehicles in the not-so-distant future.

Navistar expects to start production in San Antonio in spring 2022.

“San Antonio will be capable of building both diesel and fully electric trucks with the same robust manufacturing process, with no offline assemblies,” Navistar President and CEO Persio Lisboa said in a third quarter earnings call with analysts last week, according to a transcript.

The pandemic-induced recession has cut into the truck-maker’s earnings, prompting Navistar officials to rethink the company’s future production.

“As a result of the pandemic, we had the opportunity to revisit our investment portfolio and re-time noncritical programs and cancel others,” Lisboa said in a statement. “By streamlining our investments, we were able to free up significant capacity, which is being redeployed into advanced technology programs and strategic partnerships that accelerate our pace of progress.” 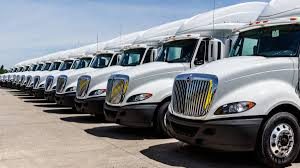 Navistar cut costs early in the pandemic, and in June, Lisboa took over as CEO after his predecessor, Troy Clarke, was named executive chairman.

In July, Navistar announced a partnership with TuSimple, an autonomous truck startup founded in the U.S. by Chinese nationals. The two companies will co-develop a self-driving truck targeted for production by 2024.

The electric truck market is still in its early stages in the U.S. Last year, the industry generated a meager $211 million in revenue, according to market research company P&S Intelligence.

By 2030, however, P&S expects the electric truck market to be worth more than $30 billion as concerns over vehicle emissions and a heavy reliance on e-commerce deliveries push more companies to adopt the technology.

P&S expects that long-haul trucks with a battery range greater than 500 miles will see the fastest growth in sales among all electric trucks over the next decade.

“This is ascribed to the rising demand for freight services, as a result of the swift growth in the e-commerce industry,” P&S analysts said in a recent report.

Navistar’s shift to electric vehicles appears to have been in the works for at least a year.

In October, Navistar unveiled a battery-powered prototype of its medium-duty International MV truck at the North American Commercial Vehicle Show. That same day, the company also introduced its “NEXT eMobility Solutions,” a new business unit dedicated to developing electric trucks and school buses.

Earlier this summer, electric vehicle maker Tesla also announced that it’s entering the electric truck market — albeit for consumers, not industry buyers. The company is building a $1.1 billion factory near Austin that will produce Tesla’s Cybertruck, a passenger pickup with a battery that provides a range of over 250 miles.

Navistar’s announcement that it will begin producing electric trucks in San Antonio came as the manufacturer reported heavy losses in recent months.

“Our fiscal third quarter opened during the middle of many stay-at-home orders and ended with sections of the economy beginning to reopen, and our results certainly reflect this,” Lisboa said.

Since November, Navistar has posted $111 million in losses on $5.4 billion in revenue.

Navistar on Tuesday said it turned down an acquisition offer from the Traton Group, a subsidiary of Volkswagen focused on heavy-duty truck manufacturing. Traton offered the company $43 per share.

Navistar officials said the offer “significantly undervalues” the company. But they added that “it does represent a starting point for further exploring the possibility of a transaction.”

The company agreed to allow Traton to conduct additional due diligence.