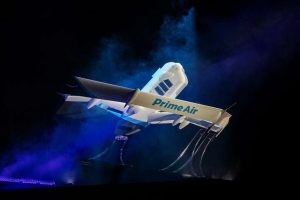 Prime Air?  It’s what Amazon.com Inc. gets approval to create and now is one of only a handful of companies certified by the federal government to operate as a drone airline.

The Federal Aviation Administration designated Amazon Prime Air an “air carrier,” the company said Monday reported the Houston Chronicle. That allows Amazon to begin its first commercial deliveries in the U.S. under a trial program, using the high-tech devices it unveiled for that purpose last year.

Amazon and its competitors must still clear some imposing regulatory and technical hurdles before small packages holding the likes of cat food or toothpaste can routinely be dropped at people’s homes. But the action shows that they’ve convinced the government they’re ready to operate in the highly regulated aviation sector.

“This certification is an important step forward for Prime Air and indicates the FAA’s confidence in Amazon’s operating and safety procedures for an autonomous drone delivery service that will one day deliver packages to our customers around the world,” David Carbon, an Amazon vice president who oversees Prime Air, said in a statement.

The FAA confirmed it had granted the approval, saying in a statement that it’s trying to support innovation in the expanding drone arena while ensuring that the devices operate safely.