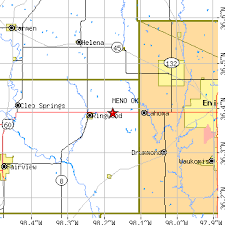 The U.S. Geological Survey reported the quakes were about 20 minutes apart and struck around the small town of Meno, located nearly 15 miles west of Enid in Major County.

The 3.5 was the first quake measured and struck at 10:18 a.m. 2.3 miles east-southeast of Meno reported the Enid News and Eagle. It was just under a mile deep and originally was listed as a magnitude 3.8 on the USGS site before being adjusted to a 3.5.

The second quake was at 10:39 a.m. and was 1.9 miles east-southeast of Meno and 15 miles west of Enid, according to USGS. It was just more than a mile deep. it was listed at a magnitude 3.1 before being adjusted to 2.9.

The first quake was felt in area communities including Lahoma, Ames, Carrier, Goltry and Enid, according to social media reports. One Lahoma resident reported hearing a loud bang at the time of the quake.

There have been 28 earthquakes with a magnitude of 3.0 and higher in Oklahoma this year, according to USGS.