Occidental moves ahead with largest ever carbon-capture facility in Texas 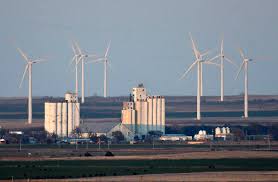 The first phase of what is expected to be the country’s largest renewable energy project of its kind should be completed next year in northern Oklahoma. NextEra Energy Resources is planning not only the 250 megawatt Skeleton Creek wind farm but a solar panel farm and a battery storage project as well.

The Enid News and Eagle reported that NextEra Energy Resources’ 250 megawatt Skeleton Creek wind power project is on track for completion by the end of the year, the developer said during a virtual project update meeting Wednesday.

The virtual meeting was hosted by NextEra and was attended by representatives from Greater Enid Chamber of Commerce, Enid Regional Development Alliance, Vance Air Force Base and other local stakeholders.

In his opening remarks, Greater Enid Chamber of Commerce President and CEO Jon Blankenship said the Skeleton Creek project “is a very exciting one for Northwest Oklahoma, and it’s going to benefit our region in many ways.”

Elinore Beitler, project developer for NextEra Skeleton Creek, said the total Skeleton Creek project, which also involves a 250 megawatt solar panel farm and a 200 megawatt battery facility — both of which should be completed in late 2023 — will be the largest such facility in the country when completed. 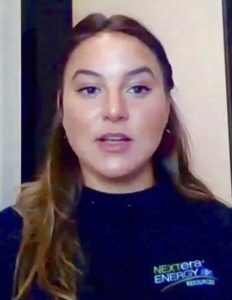 Beitler said the wind farm will be completed first, with work on transmission lines happening simultaneously, followed by construction of the solar farm and battery storage facility, which will be located southeast of Enid on approximately 2,500 acres of land.

The total footprint of the project — the wind farm, solar farm and energy storage facility — will include Garfield, Alfalfa and Major counties.

Once completed, the project will add 500 megawatts to the regional power grid, plus another 200 megawatts from the energy storage facility for up to four hours, if fully charged.

Taken together, the wind farm, solar and battery projects represent about $600 million in new NextEra energy investments in the state, Beitler said.

Beitler said the project is forecast to pay out $60 million to local landowners, and also will raise about $50 million in local property tax revenue, which will mostly be in the Timberlake Public Schools district. 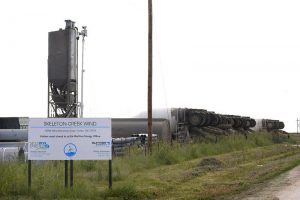 Construction currently is underway on the turbine structures, with 22 of 90 foundations poured. Each turbine site is a massive undertaking, including excavation of more than 2,200 cubic yards of earth per turbine — enough dirt to fill an Olympic swimming pool. Construction of each turbine and pad requires 60,000 pounds of steel and 400 cubic yards of concrete, all to support the 613,000-pound turbine.

Soon, 41 miles of transmission lines will be laid to bring power from the turbines to the end customer. And that end customer will be close to home, Beitler said.

Western Farmers Cooperative of Moore has signed a contract to purchase all the project’s electricity, which will be about enough to power 150,000 homes, Beitler said.

“This will be Oklahoma power, being used by an Oklahoma company to power Oklahoma homes,” she said. “It’s clean, it’s homegrown and it’s affordable.”

Contractor for the wind turbine project is Blattner Energy. Brink Constructors will follow with the transmission lines, and Ryan Company will build the substations. But, Beitler said the project couldn’t progress without the support of its many local vendors and subcontractors.

“It’s really a community effort,” she said, “and everyone should be proud of themselves for the work that’s going into getting this project up and running.”

At the height of construction the project will employ about 300 workers, and once it is operational it will employ 8-10 wind technicians.

Getting the project from blueprint to construction has been a long process, that has included building a new working relationship with the Air Force and Department of Defense.

The project, which has been planned since 2015, originally was scheduled for completion by the end of 2019. But, it was pushed back a year over concerns the wind farm might conflict with airspace used by Vance Air Force Base. Those concerns potentially pitted two massive industries against each other: wind power, which accounts for about a third of the state’s energy production;, and the military, which is the state’s largest employer.

But, retired Air Force Lt. Gen. Anthony Rock said during Wednesday’s meeting that potential conflict turned instead into a productive relationship, where both sides worked hard to “cooperate, collaborate, innovate and compromise,” and found ways to get to “yes, if” instead of focusing on “no, because.”

Rock, who served as inspector general of the Air Force before his retirement, was brought in by NextEra as a consultant to help deconflict the wind developer’s building plans with the Air Force’s airspace needs.

“We’ve definitely had a ton of stakeholders involved throughout this process,” Rock said. “The amount of approval we’ve gotten has been amazing, but it took a lot of teamwork to get there.”

Rock specifically credited former 71st Flying Training Wing commander Col. Corey Simmons, who now is the commander of the 60th Air Mobility Wing at Travis Air Force Base, Calif., with working to find a “beneficial outcome for all.”

“We’ve all learned some hard lessons,” Rock said, “about the value of early and constant engagement with all stakeholders.”

Beitler said NextEra plans to continue that level of engagement with the community as the wind farm nears completion, and well beyond.

“We almost treat this like a marriage,” she said. “You have to put in what you want to get out. We love working here, and we think it’s great for everyone.”

When Skeleton Creek is complete it will join a NextEra portfolio that includes 54,000 megawatts of wind and solar production in 37 states, plus projects in battery storage, nuclear power and natural gas. The company has been in Oklahoma for 17 years, and currently has 15 operational projects and two in development, including Skeleton Creek.

“We really do think diversity in the energy field is important,” Beitler said, “and renewable energy plays a very important part in that, and it will play a much more important role in years to come.”