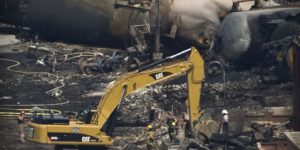 The Trump administration faces more lawsuits over its efforts to reduce the regulations on trains carrying liquefied natural gas. Environmental groups contend in their legal actions that the transportation of LNG creates in effect a “bomb train” with explosive potential to level entire towns.

The suing nonprofit Earthjustice makes the claim that just 22 train cars full of natural gas are explosive enough to rival the power of the bomb the U.S. government dropped on Hiroshima. If natural gas is that dangerous, how is it usually transported? asked Popular Mechanics.

Rolling Stone reports the issue isn’t just for environmental groups—over a quarter of U.S. states, plus Washington D.C., are suing, too. The Attorneys General for those 15 total entities are listed in the suit, which “petition[s] this Court to review the United States Department of Transportation, Pipeline and Hazardous Materials Safety Administration’s final agency action entitled ‘Hazardous Materials: Liquefied Natural Gas by Rail’.”

They say the new rule is not lawful in accordance with the Administrative Procedure Act, the Hazardous Materials Transportation Act, and the National Environmental Policy Act. The full text of the rule includes extensive details about how and with what safety measures the liquid natural gas (LNG) will be transported. There are technical specs for the layered tanks and all the required handling.

There are 3 million miles of this pipeline in the U.S. Something could happen to a natural gas pipeline, but that would represent a massive breach of a protected system. Natural gas as LNG can also be transported on ships, where common risks like civilian populations and passing vehicles just don’t exist in the same way as on land transport.

Instead, a train moves through regular areas, surrounded by combustion engines, moving parts, and large populations of people. If the Ford Pinto had been confined to rural pipelines and never turned on instead of driven and crashed on highways, we might have different associations with the name. The so-called “bomb train,” its detractors say, represents a negligible, symbolic gain in exchange for a totally unnecessary danger.