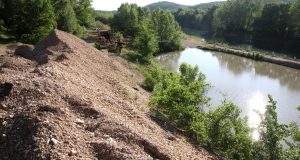 An eastern Oklahoma gravel mine operator who faces a contempt hearing over a Clean Water Act case that he lost in federal court, as well as a second lawsuit on the same grounds, is standing resolute.

“I’m being shown to be the bad guy on this deal, and I’ve done nothing wrong,” said Brad Eastman, owner of Ozark Materials River Rock. “Everything I did followed the permits and was lawful. I’m definitely not the bad guy here.”

Regardless, seven years of battling Saline Creek landowner David Beckham resulted in a court order handed down by U.S. District Judge John Dowdell in June 2018 that levied a $35,000 fine plus $40,000 in attorney fees according to a report in the Tulsa World.

The ruling also required establishment of a conservation easement on the property with restoration to be carried out by the miner under the supervision of the Cherokee Nation along the once-pristine Saline Creek, a tributary of Hudson Lake near Salina.

Eastman apparently has fallen behind on those measures and faces a contempt hearing Sept. 9 in Dowdell’s Tulsa courtroom.

“I just don’t have the money to pay all these bills, but that’s what they’ve been trying to do from the start. They want me broke. They want me shut down completely,” he said.

Now a second resident upstream of the mine on Saline Creek has filed a suit similar to the initial filing by Beckham and the Indian Environmental Law Center in Tulsa. Resident Nanetta Thompson, also with help from the Indian Environmental Law Center, sued this year to claim damages against Ozark Materials for in-stream mining activities allegedly carried out in violation of the Clean Water Act.

Thompson and her attorneys declined to comment for this story.

The suit is based essentially on the same points but alleges that more in-stream mining practices were carried out in violation of Section 505 of the federal Clean Water Act in a different part of the creek — but at the same mining operation — in 2016 and 2017.

An environmental consulting firm hired to examine the situation found what it deemed violations. The Indian Environmental Law Center filed suit as a private entity, and the federal court ultimately agreed with its arguments.

Counsel for the Tulsa District of the Army Corps of Engineers said the federal agency is not involved in the ongoing case.

Eastman, however, said Corps inspectors did come to the property and did inspect and sign off on all work in progress.

“All I did was fill up a ditch that was 3 feet wide and 3 feet deep and 30 feet long,” Eastman said. “It only had water in it when the lake was up, so I didn’t consider it a wetland, but we fixed it, and the Corps inspected it, and it’s fine.”

The miner said he is looking forward to the Sept. 9 hearing, even though it is a hearing on the contempt of court issue.

Eastman said all his mining operations on Saline Creek, save for the piles of material taken across a road from another part of the mine and sold through the main office located near the creek, have halted.