Air Force to scale down use of training jets 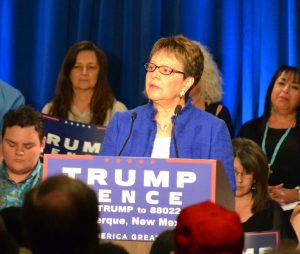 New Mexico Governor Michelle Lujan Grisham was taken to task by one Republican leader over her Democratic National Convention speech where she touted the environmental policies of the Democratic party.
Writing in the Carlsbad Current Argus, Rosie Tripp, a New Mexico Republican National Committeewoman accused the governor of embellishing her own environmental accomplishments and charged the Green New Deal, if implemented will devastate New Mexico’s energy industry.
Here’s how Tripp put her criticism of Gov. Grisham.

Gov. Michelle Lujan Grisham spoke on the third night of the Democratic National Convention, and instead of focusing her speech on the issues that truly impact New Mexicans, she touted her extreme environmental policies that will wipe out jobs and devastate working families in our state.

Lujan Grisham spoke about New Mexico’s “mini” Green New Deal, also referred to as the “Energy Transition Act,” which will completely wipe out the oil and gas industry by the year 2045. It includes a carbon tax, which will force the elimination of low-cost energy sources, such as oil, gas, and coal, pushing out competition in the market, leaving high-cost renewables as the only option.

Lujan Grisham said that while the Trump administration was rolling back red tape on the energy industry, “we’ve committed to a renewable energy future with exciting and fulfilling careers for workers all across our beautiful state.” She also said, “We’re laying a roadmap here for what America can and would look like in the 21st century — an America where we lead again, where we build safer, cleaner, and more affordable cities and communities, where we provide meaningful opportunities for workers and families to thrive and build better lives.” 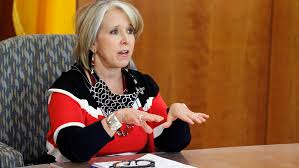 But the Governor’s embellishments of her energy policies are a downright lie. According to America Rising, 90,100 New Mexico jobs will be at risk if the nation-wide Green New Deal is implemented, and average energy costs would rise by up to $226 per month. The Competitive Enterprise Institute found that households in New Mexico would be forced to pay $71,910 in the first year of Green New Deal implementation, and $37,977 in costs annually after the sixth year of the program.

Our New Mexico economy, which relies heavily on oil and gas to keep our state coffers full (40% of our state budget), cannot afford these radical policies to tank our state any lower than it already is. New Mexico has one of the lowest per capita incomes in the United States at $46,304, and the second-highest poverty rate at 19.7%. With a massive exodus of good-paying jobs tied to the oil and gas industry and the massive taxes that the Green New Deal energy policies carry, our state cannot afford to go down this rabbit hole.

New Mexico is a beautiful state with so many vast natural resources to offer. While we fight for our small businesses and our families, especially during the Governor’s pandemic lockdown, she is more interested in auditioning for a cabinet position in a Joe Biden administration by promising the most radical policies available to grab Joe Biden’s attention. Every day, Michelle Lujan Grisham proves how out-of-touch she is with the hard-working men and women who keep our economy going in our state, and her DNC speech further proves it. We need new leadership in New Mexico at every level of government so that we can ensure crippling anti-worker policies like the Green New Deal can be stopped in their tracks.