Drones get new use in history studies

Skydweller to offer next generation of drones 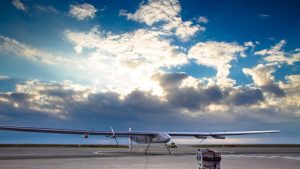 There’s a reason they call it “Skydweller” Aero Inc., the company with connections to Spain and intends to locate its new headquarters in Oklahoma City. Its drones or unmanned aircraft might be able to stay aloft for weeks or months at a time.

Based on the use of solar energy to power its engines, a new generation of unmanned aircraft will be built in Oklahoma City and tested in Ardmore. Flight operations could begin as soon as next year.

While the Orion prototype long-endurance unmanned aerial vehicle, similar to the Predator and Reaper style US military drones, flew for 80 hours, two minutes and 52 seconds, Skydweller drones might be able to fly for days and maybe longer. Maybe months.

The project was so impress that Italy-based Leonardo invested in Skydweller Aeroa Inc. last fall. Leonardo CEO Alessandro Profumo looked at it as a long-term project.

“As the key technological investor and partner of the project, Leonardo will broaden its capabilities in new power systems, autonomous flight, innovative aerostructures, ultra-light materials and eco-friendly technologies to improve the Company’s competitive advantage in the aerospace business for the next 20 years.” 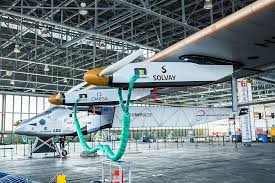 “As the key technological investor and partner of the project, Leonardo will broaden its capabilities in new power systems, autonomous flight, innovative aerostructures, ultra-light materials and eco-friendly technologies to improve the company’s competitive advantage in the aerospace business for the next 20 years “, commented Profumo.

The Skydweller project builds on a proven and mature aircraft that successfully circumnavigated the globe in 2016. The first phase focuses on converting the aircraft from a manned platform into an Optionally-Piloted Vehicle (OPV) by integrating advanced autonomy algorithms and vehicle management systems.

The second step of the project will culminate in the first production aircraft, designed solely for unmanned operations and hardened against a range of environmental conditions. Autonomous flights of the OPV are projected for 2020 and the first production model of the unmanned version of the aircraft is expected in 2021.

The system will comply with European export laws and will not be subject to International Traffic in Arms Regulations (ITAR) restrictions. This will enable the aircraft to satisfy government and commercial needs around the world. Leonardo will act as the prime contractor for commercial opportunities in Italy, the United Kingdom, Poland and NATO.

Skydweller is in the process of converting the Solar Impulse design from a manned aircraft to an autonomous drone, capable of ‘dwelling’ over a location for months at a time without the need for refueling or maintenance work.

To accomplish this, Skydweller has a 72-meter wing span covered with 2,900 sq. ft. of photovoltaic cells, which provide 2 kilowatts of power. Hydrogen fuel cells can be added for extra reliability, especially in poor weather conditions. Skydweller can cruise up to 100 kts and has an operational ceiling of 45,931 ft.

With 800 lbs of payload capacity, the drone can carry more radar and camera equipment than a MQ-1 Predator, whose primary role is reconnaissance and surveillance, though not as much as an MQ-9 Reaper, which often carries armaments as well.

“There are certainly differentiated missions that Skydweller can do that no other aircraft can do, but the core of it really is doing things that we do today better, smarter, cheaper, more effectively,” co-founder John Parkes told Avionics. “And that is communications — being a node in the sky whether for the military and first responder market or for the telecom world. And for the military specifically, doing intelligence, surveillance and reconnaissance (ISR) missions from an airborne perspective more effectively.”

The U.S. Air Force recently announced it is looking for a Reaper replacement — called “MQ-X” — to enter service around 2031. Though the Skydweller wouldn’t be able to fulfill all of the capabilities of the Reaper, as it isn’t designed to carry armaments, it could offer greatly reduced complexity and operating costs for ISR missions.

“Being able to fly thousands of miles, persist over an area for 30-60 days and fly back is a differentiator,” said Parkes. “It’s a huge cost savings to the U.S. government when you look at the whole cost of doing a lot of the national security missions that we have.”

In addition to reducing requirements for operating bases, Skydweller would require exponentially fewer takeoffs and landings than an MQ-1 or MQ-9, reducing the need for multiple platforms flying in a conveyer belt as well as associated maintenance costs.

“For us, if you’re flying 90 days with one aircraft, that’s two takeoffs and landings versus … hundreds,” Parkes said.

Outside of military applications, Skydweller’s medium-altitude, ultra-long endurance (MALE) drone could also provide cost-effective connectivity for remote populations. Though space-based connectivity solutions are improving, such as SpaceX’s low Earth orbit Starlink constellation, an aircraft at medium altitude will offer significantly more efficient use of spectrum than satellites more than 300 miles above the surface, Parkes said.

Though Parkes doesn’t expect the Federal Aviation Administration (FAA) or European Union Aviation Safety Agency (EASA) to finish their integration of unmanned aircraft into manned airspace any time soon, he believes governments will be interested in using Skydweller for communications applications to grant waivers. The aircraft is being designed to meet FAA Part 23 certification requirements.

Advancements in solar cells, batteries and other technologies driven by Tesla and SpaceX’s Elon Musk and numerous other players has rendered most of Skydweller’s development a “systems engineering exercise,” Parkes told Avionics — aside from its autonomy systems and ultra-redundant flight control systems, which comprised the bulk of the company’s engineering investment.

Skydweller raised $32 million in its Series A, including investment from Italian aerospace giant Leonardo, which owns about 17 percent of the company and controls one of seven board seats.