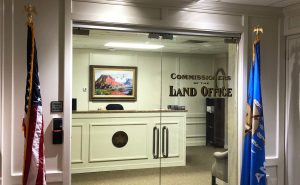 The Commissioners of the Land Office of Oklahoma meet tomorrow in a special meeting to consider naming a new CEO who has a reported history of shorting the agency on his own royalty payments. It is the governor’s second troubled appointment of a leader of the agency.

As The Oklahoman reported over the weekend, Gov. Kevin Stitt has recommended that Elliott Chambers, who is CEO of White Star Petroleum Holdings LLC should be appointed the new secretary of the Commissioners of the Land Office.

White Star filed bankruptcy last year and among its thousands of creditors was the State Land Office. The agency reportedly was owed $207,22.62 by White Star but the company challenged the amount and ended up settling for a payment of more than $176,000.

While the Land Office settled for the amount it reportedly still has not received payment. The newspaper reported the Governor’s office issued a statement about the recommended appointment and the troubled payment:

“White Star went through the same review process with the CLO Board that many companies do each year. White Star’s decision to file bankruptcy was extensively investigated and no concerns were found. The White Star settlement was discussed, voted on and approved during the February CLO Board meeting.”

The governor’s office also said Chambers, who holds an MBA from New York University, has more than two decades of experience in corporate finance and management. Chamber was named the CEO at White Star in 2016 after being a vice president and treasurer at Oklahoma City-based Chesapeake Energy Corp.

The governor’s recommendation drew criticism from Democrat leader, Rep. Emily Virgin of Norman who said the appointment should be above reproach.

“This is an entity that produces millions of dollars for our schools,” Virgin said. “The system needs someone who has impeccable credentials and doesn’t raise any red flags. Our schools and our children deserve the best person we can get into that position.”

Gov. Stitt is one of five members of the CLO board. Others are Lt. Gov. Matt Pinnell, state schools Superintendent Joy Hofmeister, State Auditor Cindy Byrd and state Secretary of Agriculture Blayne Arthur.

Stitt’s latest recommendation followed a previously troubled appointment of Brandy Vawter in 2019 to be the CLO secretary. Vawter, who lacked the required advanced degree to be secretary resigned March 20.