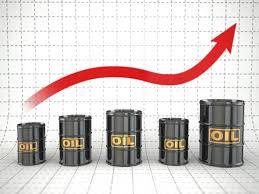 Not since March 6 have crude oil futures in the U.S. been as high as they were when trading finished Wednesday at just under $41 a barrel. Still not enough to give exploration and production companies a break-even point. Many consider it to be at least $50 a barrel before they can possibly start to make a profit.

West Texas Intermediate crude rose 28 cents or 0.7% to settle at $40.90 a barrel in trading on the New York Mercantile Exchange.

Global benchmark Brent oil for September was up 21 cents or 0.5% at $43.29 a barrel on the ICE Futures Europe exchange.

The settlements for both WTI and Brent were the highest for front-month contracts since March 6, according to Dow Jones Market Data.

What prompted the gain? An increase in U.S. crude imports and a weekly decline of gasoline supplies suggested an improved energy demand is underway.

It also occurred as crude supplies at the storage hub in Cushing rose by 2.2 million barrels for the week while total oil production was unchanged at 11 million barrels a day, according to new data released Wednesday by the U.S. Energy Information Administration.

A closer look at the data shows that the crude-oil build happened “due to higher crude oil imports,” said Manish Raj, chief financial officer at Velandera Energy. “This is a huge positive, since it suggests growing domestic oil demand and the U.S. acting as the market of last resort for this commodity.”

“Offsetting this bearish build was the largest draw to gasoline inventories since early March, as implied demand gradually recovers,” he said.

The weekly fall in U.S. gasoline supplies came on the back of average implied demand of 8.5 million barrels a day over the four week period ended July 3, which is down 12.5% from the same period last year, EIA data show. That an improvement from the previous report, which showed the four-week implied demand down by 15%.

Local energy firms saw a mixture of the impact with SandRidge Energy seeing a 2-cent or 1.61% gain, settling at $1.26 a share.

On the Utilities Sector, American Electric Power rose 3 cents and finished at $82.42.