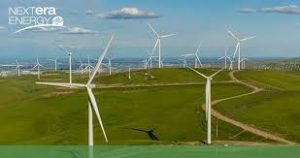 The proposed solar farm would be located in Otero County on New Mexico State Trust land near Chapparal, if NextEra gets approval for the project according to the Alamogordo Daily Times.

The Buena Vista Solar Plant would include solar panels and a battery storage facility, per a presentation recently given before the Otero County Commission.

Gabe Henehan of NextEra Energy Resources presented the project, aiming to earn an industrial revenue bond (IRB) from the county to help get the facility built.

Henehan was at the county commission meeting to introduce the project to the commission and no decisions were made.

Public hearings would also be held as part of the bonding process, Henehan said.

Industrial revenue bonds are municipal bonds that are between a private entity like NextEra and a public entity like Otero County.

When the solar farm becomes operational, Otero County could get some payments in lieu of taxes (PILT or PILOT) from the project.

The El Cabo Wind Farm was established in Torrance County, and the county, Estancia Municipal Schools and Willard Public Schools all started receiving quarterly payments in lieu of taxes shortly before the wind farm became fully operational that have so far continued.

The Buena Vista Solar Plant will include a 100-megawatt solar plant and a 50-megawatt battery storage facility is expected to be completed by May 2022 and include 200 construction jobs for the 10 to 12 months of construction.

“This would be a pretty substantial project for the state alone from a solar plus battery storage (perspective),” Henehan said.

If approved, the facility would be the largest battery storage facility in New Mexico.

The location of Buena Vista Solar Plant in Chaparral would be just outside the Permian Basin, one of the nation’s most active oilfields.

District 2 County Commissioner Couy Griffin voiced his opposition to the project citing the impact it could have on the region’s oil and gas industry.