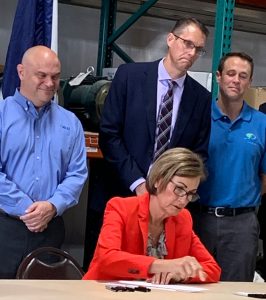 While Oklahoma Gov. Kevin Stitt is in something of a fight over  biofuel waivers for small refineries like the one in Wynnewood, Iowa Governor Kim Reynolds has approved legislation that reduces the Iowa tax on gas with an ethanol blend of 15 percent or higher. It applies the same six-cent per gallon break to 20 percent or higher blends of biodiesel.

“It’s going to make higher blend biofuels even cheaper at the pump, making it an even more appealing option for consumers,” Reynolds said. “That’ll drive demand for home-grown renewable fuels which is good for Iowans, our farmers and, of course, our Iowa biofuels industry.”

Oklahoma Gov. Kevin Stitt was one of five Governors to ask the Trump administration in April for a nationwide waiver exempting the oil-refining industry from the nation’s biofuels law to help oil and gas operators survive the oil crisis caused by the coronavirus pandemic.

“As our country comes to grips with this national emergency, continuing to implement the current (biofuel requirements) imposes an added obligation that would ‘severely’ harm the sector, and consequently harm the economy of the States and the Nation,” stated Stitt and the governors of Texas, Wyoming and Utah after Louisiana’s governor sent a separate letter. Each was sent to Environmental Protection Agency Administrator Andrew Wheeler.

“That is in addition to the $3 million that is in the state budget, making it a total investment of $10 million in our renewable fuels infrastructure program,” Reynolds says, “which will help us drive consumption at pumps across the state.”

A small group of Black Lives Matter activists from Des Moines drove 90 minutes north to protest outside the plant Reynolds visited. The group has been calling on Reynolds to immediately issue an executive order that restores voting rights to released felons.