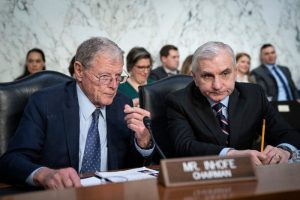 Oklahoma U.S. Sen. Jim Inhofe finds himself somewhat at odds with the EPA Administrator over the National Defense Authorization Act.

US Senators earlier this week agreed to incorporate amendments to their version of the NDAA, S. 4049 (116), that would impose additional sanctions on the Russia-to-Germany Nord Stream 2 pipeline, boost carbon capture and sequestration technologies, promote advanced nuclear technologies and extend the popular Diesel Emissions Reduction Act.

POLITICO’s Morning Energy report stated the Nord Stream 2 measure has already drawn fire from members of the German parliament. In a letter to Armed Services Chair Jim Inhofe (R-Okla.) and obtained by ME, one Bundestag member wrote expanded sanctions would “interfere in the sovereign ability” of Germany and other European nations to manage their own infrastructure.

— A battle between the departments of Defense and Energy also broke out into the open on Tuesday over provisions in the Senate defense bill that would grant authority to the Nuclear Weapons Council, which is made up mostly of Pentagon officials, to stipulate funding levels for the budget of the National Nuclear Security Administration.

Energy Secretary Dan Brouillette, in a blunt letter to Inhofe on Monday, said the bill “violates DOE’s position as a distinct and equal Cabinet-level agency” and “restricts the President’s capacity in exercising his responsibility to set budget levels, and subjects the priorities of NNSA to DoD’s discretion, potentially causing setbacks and underfunding of other critically important missions of the NNSA.” The letter was first reported by Roll Call.

— Also on ME’s radar: Florida Sen. Marco Rubio filed an amendment to the NDAA on Tuesday that would extend the offshore drilling moratorium in the Eastern Gulf of Mexico for another 10 years, a spokesman told ME. Democratic Sen. Jeanne Shaheen (D-N.H.) has also filed several PFAS amendments, but one that caught ME’s eye would designate PFOA and PFOS as hazardous and a pollutant or contaminant under Title X of the U.S. Code — a designation that would force DoD to clean up the pollution and allow the department to recover costs for doing so.