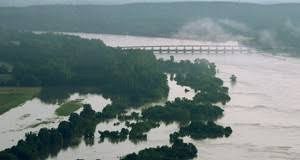 The House passage this week of the Water Resources Development Act will include some $133 million in proposed improvements to the flood levees around the city of Tulsa and to the  McClellan-Kerr Arkansas River Navigation System in eastern Oklahoma.

Rep. Kevin Hern (OK-01) was among those who supported HR 7575 which passed the House Wednesday by unanimous consent.

“There’s a lot to be happy about in the WRDA that passed today,” said Rep. Hern. “Included in the bill were funds for the Army Corps of Engineers to make upgrades on the Tulsa-West Tulsa Levee System. Last year, a flood decimated parts of Tulsa. Had the aging levees failed, the devastation would have been much worse.” 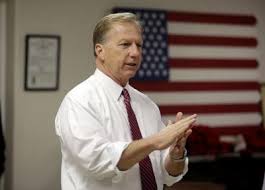 Hern pointed out it has been 12 years since the levees were rated “unacceptable” and at “very high risk of failure.”

“Updates are long overdue, but it’s great to see those funds included in this bill. Also included in the WRDA are funds to clear the McClellan-Kerr Arkansas River Navigation System (MKARNS) from silt deposits as a result of the 2019 floods and other updates and security measures for MKARNS,” added the Republican congressman.

The following projects for water resources development and conservation and other purposes, as identified in the reports titled ‘‘Report to Congress on Future Water Resources Development’’ are authorized to be carried out by the Secretary substantially in accordance with the plans, and subject to the conditions, described in the respective reports or decision documents designated in this section:

Purpose: The Tulsa-West Tulsa Levee System protects thousands of Oklahomans and more than $2 billion in public and private infrastructure in the immediate vicinity. In 2008, the U.S. Army Corps of Engineers rated the Tulsa-West Tulsa levee system as “unacceptable” and “very high risk” of failure making clear the need and urgency for modernization and upgrades. The 2016 WIIN Act authorized a feasibility study necessary to improve the levee system. The 2018 Bipartisan Budget Act funded a feasibility study on its upgrade and modernization, which was completed recently. The project is ready to move into the preconstruction engineering and design (PED) phase and awaits only authorization and appropriation by Congress.

SEC. 133. MATERIALS, SERVICES, AND FUNDS FOR REPAIR, RESTORATION, OR REHABILITATION OF 2 PROJECTS.

“(a) IN GENERAL.—In any area covered by an emergency or major disaster declaration declared under the Robert T. Stafford Disaster Relief and Emergency Assistance Act (42 U.S.C. 5121 et seq.), the Secretary is authorized to accept and use materials, services, and funds, during the period the declaration is in effect, from a non-Federal interest or private entity to repair, restore, or rehabilitate a federally authorized water resources development project, and to provide reimbursement to such non-Federal interest or private entity for such materials, services, and funds, in the Secretary’s sole discretion, and subject to the availability of appropriations, if the Secretary determines that reimbursement is in the public interest.

(b) ADDITIONAL REQUIREMENT.—The Secretary may only reimburse for the use of materials or services accepted under this section if such materials or services meet the Secretary’s specifications and comply with all applicable laws and regulations that would apply if such materials and services were acquired by the Secretary, including sections 3141 through 3148 and 3701 through 3708 of title 40, United States Code, section 8302 of title 41, 24United States Code, and the National Environmental Policy act of 1969.

Purpose: The MKARNS serves as a vital economic corridor across a 12-state region, moving 10.9 million tons of commerce worth $3.5 billion annually. Unfortunately, terrible floods in Eastern Oklahoma this past May and June deposited tons of silt in the navigation channel, preventing full navigation of the MKARNS and necessitating the re-dredging of the navigation channel.

Non-federal MKARNS stakeholders should be enabled to respond more quickly, but there is no means by which stakeholders are able to seek reimbursement for activities returning the MKARNS to its pre-flood, navigable state.

‘‘(C) COST-SHARING REQUIREMENTS.— The Secretary shall require a non-Federal interest to contribute not less than 25 percent of the costs for maintenance dredging of that portion of a maintenance dredging project described in subparagraph (A) that is located outside of the Federal navigation project, which may be provided as an in-kind contribution, including through the use of dredge equipment owned by non-Federal interest to carry out such activities.’’

Purpose: The current cost share for ongoing and future construction projects and major rehabilitation on the inland waterways system is 50% Inland Waterways Trust Fund (IWTF) and 50% general revenues. We propose changing the cost share to 25% IWTF and 75% general revenues.

This change would allow the USACE inland waterways construction program to operate more efficiently at the same funding level. In the past, this change of funding weights has been done for individual projects. We expect this change to allow the authorized construction resumption on the deepening of the MKARNS from 9 to 12 feet sooner than under the current funding formula.