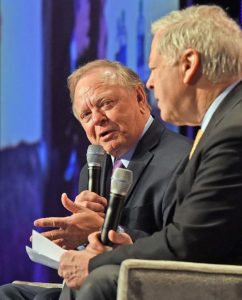 One of the pioneers of the Bakken shale play said Tuesday he expects to see “a decent recovery” for the oil industry by year’s end, with more wells coming online in 2021.

“It will recover,” said Harold Hamm, executive chairman of Continental Resources. “It may not be a boom. We don’t need a boom. We just need to get some sound economics working for the industry again.”

He encouraged oil field service companies to “never give up” as they try to ride out this year’s downturn, brought on by a price war between OPEC and Russia, then a major drop in oil demand amid the coronavirus pandemic and a volatile day in April when oil prices turned negative.

“I’ve seen this industry up and down so many times, it’s unreal,” he said. “Have faith in the industry. It’ll be here.”

Continental idled many of its North Dakota oil wells in recent months. Oil prices have improved somewhat since this spring, and Hamm said he expects that trend to continue over the course of the year.

A coronavirus vaccine could lead to a major turnaround, he said.

“When I was a little kid, polio was a big deal,” said Hamm, who was born in 1945. “Everybody feared it a lot. A polio vaccine came out and suddenly it was over. I hope that’s the way this happens.” 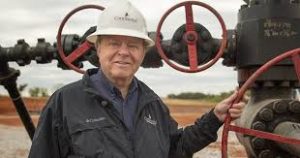 Hamm also touched on the threat climate change activism poses to the oil and gas industry, saying that “we have to continue to fight” activists “that use it as religion.” He said air quality is not problematic today.

But environmental activists are critical of the oil and gas industry for its air emissions — particularly leaks of methane, which is the main component of natural gas. Methane, a potent greenhouse gas that contributes to climate change, can leak from well sites and from other pieces of oil field infrastructure.

During the virtual event, Hamm and a representative from S&P Global Platts spoke about the energy and commodities information firm’s effort to establish a new pricing benchmark for oil based in the Gulf Coast. In June, S&P Global Platts launched a marker called Platts AGS, which stands for Platts American GulfCoast Select.

The idea is to compete with West Texas Intermediate pricing, the standard for oil pricing in the United States. WTI often refers to the futures contract for a grade of oil delivered to a terminal in Cushing, Okla.

Officials in North Dakota often use the WTI price in making forecasts for the oil industry and anticipated tax revenue. State leaders say Bakken oil is worth about $8 per barrel less than WTI, given the need to transport the crude long distances across the country to refineries and export terminals. WTI oil was trading for around $41 per barrel Tuesday.

Platts AGS reflects pricing at terminals across the Houston area, including in Corpus Christi, Beaumont and Nederland, which are all cities known as oil hubs in Texas. Bakken crude might one day be included as well, Ernsberger said. His firm estimates that Bakken oil accounted for 7% of Gulf Coast crude exports over the past year.

Hamm said establishing the new benchmark price is one step toward a larger effort to sell American oil via a new market. Interest in such a change gained momentum after oil prices collapsed April 20 and the WTI futures contract settled in negative territory.