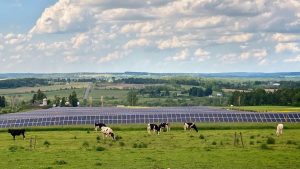 Oklahoma is one of three states to be studied by Cornell University researchers looking into the impact of solar arrays on farmland.

The three-year project launched in June with funding from the U.S. Department of Agriculture’s National Institute of Food and Agriculture. The goal is to study the risks and opportunities of solar energy production on agricultural lands in the three states reported the Olean Times Herald

The overall project is led by the University of Maryland, with Cornell receiving $170,000 to study impacts in New York. The findings will inform educational materials for landowners, farmers and attorneys, with practical tips related to solar energy contracts.

“Because large-scale solar development hasn’t happened yet in New York, the implications about its significance are mostly speculative,” said Kay, the project director at Cornell. “We expect a systematic study of leases to offer rare insights into the economic, social and environmental implications we should expect in three states at different stages of solar development.”

Large solar energy installations can cover 1,000 acres or more, and solar companies often seek flat, cleared land used for agriculture for these sites. Rural areas with abundant farmland are far less densely populated than downstate areas, but there are considerable challenges to negotiating with landowners and turning agricultural land into solar farms.

It remains unclear where the researchers will study solar operations in Oklahoma, where the commercial solar industry is still considered a fledgling one.

As of March, approximately 40 large solar facilities are under state-level permit review — including proposed sites in Cattaraugus County. The facilities could generate upwards of 9 gigawatts of electricity.

Most of these projects are concentrated in the state’s “solar belt,” stretching from Western New York’s dairy country to the outskirts of the Adirondacks.

“Large solar farms can bring a needed source of diverse income to our New York farmers and rural landowners, and reduce greenhouse gas emissions that warm the climate,” Chatrchyan said. “But both the state and farm communities are wondering how to balance these benefits with protection of valuable farmland. Research-based guidance from Cornell will help landowners make better decisions.”

In a research paper from Cornell’s Community and Regional Development Institute, Kay and co-authors Roberta Nilson and Richard Stedman note that it’s highly unlikely that all the facilities will be constructed. But the ways that stakeholders — communities, farmers, developers and state politicians — cooperate will determine how solar energy fits into the state’s climate and electricity generation goals.

“Given New York state’s pioneering and ambitious energy policies, its ability to navigate these challenges and meet these goals will set the stage far beyond the state’s borders,” researchers wrote in the paper.

Cornell Cooperative Extension educators are being increasingly contacted about emerging issues with solar energy and land rights. As part of the project, Chatrchyan and Kay will implement a train-the-trainer approach to educate extension staff in New York.