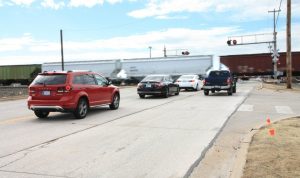 Burlington Northern Santa Fe finds itself in yet another legal battle over its railroad crossings. This time, it involves plans by the city of Moore to force the railway to pay for the cost of building a railway underpass at a site where traffic is sometimes stalled by train traffic.

Moore unveiled the proposed project three years ago, stating a need because of heavy car and truck traffic as well as railroad traffic at the SE 4 street crossing.

At the time, city officials said 18,000 vehicles used the crossing daily and up to 30 NBSF freight trains a day pass through Moore. Amtrak’s Heartland Flyer also passes through twice a day. They complained that railroad crossing gates force a backup of traffic whenever trains pass through the crossing.

Moore intended to use federal Housing and Urban Development funds for the design of the underpass but now want to force BNSF to pass for construction.

Earlier this year, the city of Moore filed an effort with the Corporation Commission for  relief for the payment of the cost of the grade separation of 4th street and South Turner Avenue. The railway is fighting the move and sought oral arguments before the commission “en banc” but was denied.

So the oral arguments on BNSF’s exceptions will be held Thursday during a 10:30 a.m. hearing in room 301 of the Jim Thorpe building. Commissioners might attend but otherwise, they will not take a vote on the matter on Thursday.

In a posting Tuesday morning, the Commission said that in light of COVID-19 and restricted access to the Jim Thorpe building, counsel for the affected parties will be allowed to make their arguments in-person, provided they follow the federal and state health restrictions and instructions. 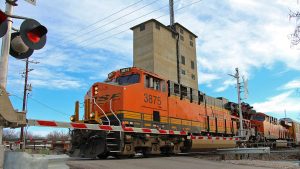 The fines were the result of a new state law that allowed local law enforcement to fine freight railroads for blocking a railroad crossing for more than 10 minutes. The law took effect Aug. 1 of last year but BNSF contends it violates two existing federal laws—the Interstate Commerce Commission Termination Act and the Federal Railroad Safety Act.

Under Oklahoma’s law, local law enforcement can levy a fine on a stalled freight train up to $1,000 for blocking a cross for more than 10 minutes. The lawsuit claimed that Edmond police issued citations to BNSF on July 17 and July 29. Then on July 30, Edmond’s assistant city attorney filed a complaint against the railway before the Corporation Commission to enforce the citation. The OCC issued a citation and set a hearing for BNSF failing to comply. The same set of circumstances happened in the city of Davis.

The railway has presented arguments such as a Government Accountability Office study that found freight train length has increased an estimated 25% since 2008 resulting in the average lengths of 1.2 and 1.4 miles in 2017. While rail officials identified increased efficiencies and economic benefits, they also said the arrangement of train cars and locomotives and the potential for blocking highway-railroad crossings are issues to consider.

The GAO study also found that longer trains might decrease the frequency of blocked crossings but some state and local officials contend the longer trains can prolong their duration.

While BNSF is fighting the railway crossing in federal court and before the Corporation Commission, it recently made a $5,000 campaign contribution to Commission Chairman Todd Hiett.

The contribution was dated May 28, 2020 shortly before Commission Chairman Hiett won his primary election race for the GOP nomination. He is seeking re-election to a second term and faces opposition from Libertarian candidate Todd Hagopian. It is unknown whether Hiett will recuse himself from the hearing because of the contribution.