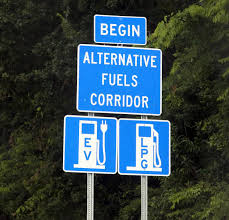 The US Department of Transportation Federal Highway Administration has identified the stretch of Interstate-25 between Santa Fe and Albuquerque as the state’s first electric vehicle and compressed natural gas ready “alternative fuel corridor.”

Until this designation, New Mexico was one of only four states without a single  alternative fuel corridor, according to the Santa Fe Reporter.

“This designation is very important to helping us take those next steps to push the state forward with alternative fuels,” says Colin Messer, the director of the Land of Enchantment Clean Cities Coalition, an organization that worked with the state and with Public Service Company of New Mexico to apply for the alternative fuel corridor designation.

Messer tells SFR the designation will increase the state’s eligibility for grants and other funding in the future as well as raise public awareness of alternative fuels as a viable option.

“If there is ever infrastructure development money available, we can apply. We are in the game,” he says.

The designation means that there are “direct current fast charging stations” located at least every 50 miles along the highway between the two cities.

Fast charging stations change the game for electric vehicles because they have the power to completely charge a car’s battery within around an hour or less. Most charging outlets commonly found at homes and public places are far less powerful and require a car to be plugged in for at least five hours or overnight to fully charge. 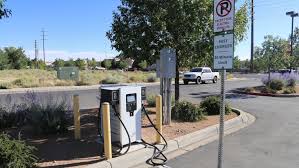 One DC fast charging station sits halfway between Santa Fe and Albuquerque at a Phillips 66 along I-25, and there are a handful in Albuquerque. There are also dozens of simple charging outlets along the route and in each city, along with several Tesla charging stations that work exclusively for cars by that brand.

Messer tells SFR part of the challenge in expanding electric vehicle corridors has to do with the state’s lack of incentives for private businesses to build charging stations along viable routes or for individuals to buy cars that run on electricity.

New Mexico legislators introduced an electric vehicle income tax credit bill in the Senate the January session, but it died in committee.

The state’s aging electric infrastructure poses an even more complex problem, Messer says. There are many rural areas where there might not be access to electricity along the interstate, or where the existing infrastructure is far too fragile to provide a reliable fuel source.

The Land of Enchantment Clean Cities Coalition works on promoting a variety of  alternative fuels, including liquid propane, hydrogen and ethanol, as well as electric vehicles.

Several other stretches of highway in New Mexico, mostly in the southern parts of the state, won designations as alternative fuel corridors for liquid propane.

Messer tells SFR that each of these fuels has a role in an alternative fuel ecosystem—for instance, he says, compressed natural gas and propane are some of the cleanest and cheapest sources of energy available for larger vehicles such as trucks and buses, and are also more accessible in some parts of the state.

These fuels are produced in New Mexico, and can sometimes be an even cleaner source of energy than electricity, especially if the electricity is produced by burning coal.