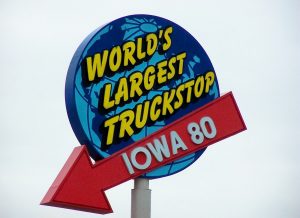 Months after an unexpected compromise between Iowa utilities and clean energy groups to preserve net metering in the state, the sides are sparring again about how the new law should be interpreted by regulators. And the latest fight involves a gigantic truck stop in the state.

The state’s two major utilities, Interstate Power and Light and MidAmerican Energy, in recent weeks filed revisions to their pricing structures, known as tariffs, that spell out details of the net metering law. Among the controversial points is a suggestion that retailers such as gas stations be prohibited from selling power to charge electric vehicles.