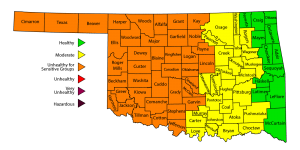 Those strong 30 mile an hour winds that raced across the western half of Oklahoma on Tuesday resulted in a warning about air quality from the Oklahoma Department of Environmental Quality.

Nearly 40 counties were under the DEQ warning and health advisory that said the air conditions caused by the strong winds were “unhealthy for sensitive groups.”

“Active children and adults, and people with respiratory diseases, such as asthma, should limit prolonged exertion,” stated the advisory. “For particulate matter advisories, sensitive groups include those with heart disease. Everyone should limit exposure to smoky areas.”

The eastern half of the state contained air that the DEQ described as “moderate” and “healthy.”