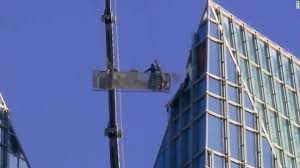 Thirteen months after a window-washing basket swung wildly out of control, smashing windows near the top of the 50-story Devon Tower in downtown Oklahoma City, the company has started replacing the windows.

The Oklahoman reported Tuesday that a construction crane was moved next to the company’s headquarters tower so workers could replace the broken windows. The areas where the windows were broken have been off-limits to Devon employees since the May 15, 2019 incident in which two window washers had to be rescued by firefighters.