Oklahoma regulators give approval to voluntary shut-ins of wells

With little discussion, Oklahoma Corporation Commissioners on Wednesday voted to give oil producers the legal liability protection of shutting in wells as prices for crude continue to remain in the upper $30. The vote ended nearly two and a half months of efforts by some oil producers to get the legal protection to turn off the production of their wells without the fear of being hauled into court by the owners of the wells.

The vote was 2-1 with Commission Chairman Todd Hiett and Commissioner Dana Murphy supporting the request made by Tulsa-based LPD Energy Company LLC. Commissioner Bob Anthony stated again, he was against the move that essentially allows other energy companies to follow suit should they prefer shutting in wells.

The firm had initially received support for an emergency order after stating that the production of crude oil at low prices was essentially a “waste.” The decision allows oil producers to voluntarily shut in production should they choose to do so. It is not a mandated order forcing them to turn off oil production.

“These current conditions have resulted in “waste” under Oklahoma law, including but not limited to economic waste and/or production in excess of reasonable market demand,” stated the interim order.

In approving the emergency order in April, Commissioner Dana Murphy sided with LPD Energy as well as the Oklahoma Energy Producers Alliance.

“The global energy landscape has been turned upside down due to the COVID-19 pandemic,” Corporation Commissioner Dana Murphy said in a statement. “While overproduction by Saudi Arabia and Russia has played a role in the collapse in oil prices, the far bigger factor is a drop in oil demand that only weeks ago would have been thought impossible.”

Commissioner Anthony, in opposing LPD Energy’s request referred to a dissenting statement he made in early April in which he raised the question “what happens when the price goes up? When does such waste begin and end.”

“The emergency order gives any well operator the discretion to curtail or shut-in their oil production because of market price. The first problem with the grant of such a privilege is that the emergency order does not set any standard of parameters for the exercise of such discretion,” wrote Anthony. “If there is ever any dispute over the exercise of that discretion, how would anyone enforce such an order.” 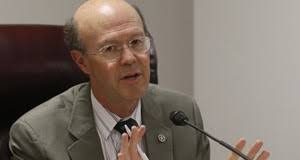 The Commissioner contended if the emergency order gives a well operator discretion to curtail or shut-in a well because of waste, then logically it also gives him the discretion or choice to produce oil from his well while waste is occurring from his production.

Regulators wrestled with a second and continuing request from the Oklahoma Energy Producers Alliance, a request very similar in wording to the one approved for LPD Energy.

“I don’t know if an order is necessary anymore,” commented Commissioner Murphy, since the order was essentially the same as the one approved for LPD Energy.

Commissioner Todd Hiett suggested leaving the item “on the table “which means it leaves it dead but also revivable.”

After several minutes of discussion, the commission tabled the OEPA request for one week.