A U.S.-Spanish aerospace and drone manufacturer, Skydweller Aero Inc. announced Tuesday it is establishing its corporate headquarters and engineering operations in Oklahoma City and testing and integration in Ardmore, Oklahoma.

Skydweller, a firm developing renewably powered aircraft for defense and commercial industries, plans to increase operations to 120 aerospace engineering and field technician jobs in Oklahoma by 2024.

“It has been my pleasure to work closely with the leadership team at Skydweller, and I am thrilled they have decided to locate their new headquarters in Oklahoma,” said Gov. Kevin Stitt. “Our state’s commitment to aviation and aerospace makes Oklahoma City an ideal choice for a cutting-edge company with a commitment to advancing the industry. At a time when job creation and economic growth are so vital, we are excited that Skydweller will be hiring our bright engineers and helping to enrich our state’s economy.” 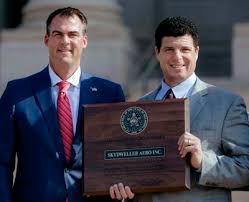 Founded in 2017, Skydweller recently closed a Series A funding round in September 2019. The company currently has offices in the Washington, D.C. area, Madrid and Valdepeñas, Spain.

This rapidly growing multi-national startup will be recruiting top-tier aerospace and software engineering talent to further the development and deployment of their ultra-persistent, unmanned aircraft in both locations over the coming years.

“Skydweller was founded to develop ultra-persistent aircraft to enable the next generation of connectivity and global insights,” said CEO Dr. Robert Miller. “We are honored to be moving our corporate headquarters to Oklahoma, following in the footsteps of Oklahoma aviation titans like Wiley Post. Oklahoma’s inspired and dedicated engineering talent will help make our vision a reality.”

Skydweller Aero is a developer of ultra-persistent drones for commercial and military applications. Founded by John Parkes and Robert Miller, Skydweller purchased the assets and intellectual property of the Swiss Solar Impulse project, which invested $190 million in developing experimental aircraft that in 2016 proved capable of circumnavigating the globe using only solar power.

Skydweller is in the process of converting the Solar Impulse design from a manned aircraft to an autonomous drone, capable of ‘dwelling’ over a location for months at a time without the need for refueling or maintenance work.

To accomplish this, Skydweller has a 72-meter wing span covered with 2,900 sq. ft. of photovoltaic cells, which provide 2 kilowatts of power. Hydrogen fuel cells can be added for extra reliability, especially in poor weather conditions. Skydweller can cruise up to 100 kts and has an operational ceiling of 45,931 ft.

With 800 lbs of payload capacity, the drone can carry more radar and camera equipment than a MQ-1 Predator, whose primary role is reconnaissance and surveillance, though not as much as an MQ-9 Reaper, which often carries armaments as well.

“There are certainly differentiated missions that Skydweller can do that no other aircraft can do, but the core of it really is doing things that we do today better, smarter, cheaper, more effectively,” co-founder John Parkes told Avionics. “And that is communications — being a node in the sky whether for the military and first responder market or for the telecom world. And for the military specifically, doing intelligence, surveillance and reconnaissance (ISR) missions from an airborne perspective more effectively.”