Could other energy firms follow Chesapeake into bankruptcy court? 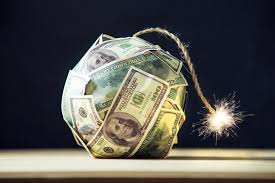 The bankruptcy filing by Oklahoma City’s Chesapeake Energy, one of the largest bankruptcies of an energy firm in recent years has fueled speculation about other energy firms that could follow suit. Could there be a ripple effect?

Three were cited in a report by the Motley Fool which cited shrinking liquidity on the part of Houston-based Callon Petroleum and Osasis Petroleum along with Kosmos Energy based in Dallas, Texas.

Like Chesapeake reported last week in a filing with the SEC, it failed to make interest payments. Consequently, the question is raised whether those three Texas firms will join Chesapeake in bankruptcy court.

Here’s how analysts reviewed the financial challenges of the companies.

Callon Petroleum is struggling under the weight of more than $3 billion of debt, some of which it took on to complete its highly controversial merger with Carrizo Oil & Gas. Callon initially expected that the increased scale would enable the combined company to cut costs and generate free cash flow to chip away at its debt. Unfortunately, this year’s crash in crude prices blew up that plan.

Now the company has hired advisors to explore other ways to address its debt. While it doesn’t have any debt maturities until 2023, its liquidity is starting to dry up. Its financial flexibility took a big hit in early May, when Callon’s banks reduced the availability under its revolving credit facility from $2 billion to $1.7 billion. The company has already drawn $1.35 billion, leaving it with a dwindling supply of available credit. If its banks cut its borrowing base again in the fall, Callon might have no choice but to file for bankruptcy protection and restructure its balance sheet.

Oasis Petroleum is in a similar boat. In late April, its banks slashed the borrowing base on its credit facility from $1.3 billion to $625 million, with plans to further reduce it to $600 million on July 1. That’s putting the company is a tight spot, since it had drawn $522 million on the facility, and had $19 million in letters of credit, which count against its borrowing base, though it did have $100 million in cash to help cushion that a bit.

Oasis also has $1.8 billion of senior notes, a sliver of which mature next year before a larger amount comes due in 2022. With junk-rated credit and dwindling liquidity, the company won’t be able to refinance this debt, leaving a bankruptcy restructuring as increasingly likely unless oil prices skyrocket by this fall.

Kosmos Energy’s banks completed the redetermination of its credit facility in early April, reducing its borrowing base from $1.6 billion to $1.5 billion. That puts it in a tight spot since it had borrowed about $1.4 billion on that facility. On a more positive note, its overall liquidity was higher at $580 million when adding in its cash position and the availability under another credit facility. Meanwhile, the company doesn’t have to make any principal payments on its credit facilities until 2022, and no bonds mature until 2026.

However, if Kosmos Energy’s banks cut its borrowing base again, the company might need to file for bankruptcy to restructure its debt. Meanwhile, even if it manages to stay afloat, its large debt load will probably continue putting downward pressure on its stock price.

–Kosmos Energy announced Monday that it has entered into a crude oil prepayment agreement with Trafigura Trading LLC .