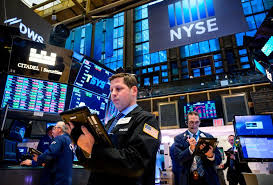 With more speculation about Chesapeake Energy’s reported intentions of moving closer to pulling the trigger on a Chapter 11 bankruptcy filing, shares that jumped 182% on Monday plunged 74% on Tuesday forcing the New York Stock Exchange to halt trading.

Reports indicated that the stock market initially stopped Chesapeake shares from being traded at the opening on Tuesday. Then circuit-breakers were triggered again after the buying and selling of company shares resumed, only to reach a low of $18.41.

The potential filing, first reported by Bloomberg, could hand control of the Oklahoma-based group to the creditors holding around $9 billion in outstanding debt and send shockwaves around an industry struggling to cope with this year’s 40% plunge in U.S. crude prices.

Once an industry giant and leader of the fracking revolution that transformed American production of oil and natural gas, Chesapeake has struggled in recent years amid low commodity prices and a massive debt load.

Chief Executive Officer Doug Lawler is seven years into an effort to untangle the financial and legal legacies of Chesapeake’s late founder, Aubrey McClendon, who took on debt to pursue aggressive drilling programs.

Chesapeake included a ‘going concern’ clause in filings with the U.S. Securities and Exchange Commission last month, and said it was evaluating strategic alternatives, including a Chapter 11 filing, while warning that it did not expect to be in compliance with its lenders by the end of the year.

“I wish people understood that common stock is the lowest ranked when it comes to bankruptcy,” the Street’s founder, Jim Cramer, told CNBC Tuesday.

Chesapeake shares, which once commanded a market value of more than $37.5 billion at their peak, were last marked 40.65% lower in pre-market trading Tuesday to indicate an opening bell price of $41.50 each, a move that would peg the company’s market value at just over $360 million.

This year’s crude collapse has added to the sector’s woes and the broader market downdraft brought on by the coronavirus outbreak in late February.

A damaging price war between Saudi Arabia and Russia, meanwhile, following the collapse of OPEC’s three-year production cut agreement in April that was only repaired by emergency pacts in May and June, has put even more pressure on the economic viability of shale output in the Permian, which analysts say requires a $50 per barrel price for oil for producers to break even.