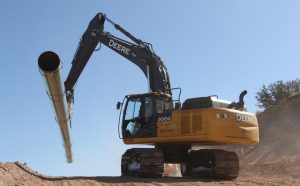 Construction is underway on a $60 million, 35-mile gas pipeline in northern New Mexico. The New Mexico Gas Company is building the line from Bernalillo just north of Albquerque to Santa Fe and it should be online next December.

The new line is being laid parallel to an existing line next to Interstate 25. Utility Vice President of Engineering, Tom Bullard said the new 20-inch will increase supply for northern towns and cities and allow the company to rely on an older 12-inch line that runs from Cuba to Los Alamos.

That older line, built by the U.S. Department of Energy in the 1940s, is reaching the end of its useful life and is difficult to replace because it cuts through national forest area, including the Valles Caldera National Preserve according to a report by the Albuquerque Journal.

“The new pipeline gives us options to reduce pressure in the old DOE line and downgrade it, or possibly abandon it altogether in the future,” Bullard said. “It also increases reliability and capacity in northern areas. It’s a big project for the company.”

The utility is now clearing rights of way and laying down pipe. It will employ nearly 160 people over the next six months to bring it online in time for next winter.

“We’re moving pipe from the rail yards to the right of ways now and stringing it out, but we haven’t begun welding it together yet,” Bullard said.

The project is among about $400 million in infrastructure investments either already done or planned by the utility from September 2017 through year-end 2021. The company filed a new rate case at the Public Regulation Commission last December to recover those investments, proposing to hike the access fee, or fixed charge, on customers’ bills from $11.65 to $12.70.

That would generate $13.2 million in new annual revenue for the utility, which also wants to increase its allowed return on equity from 9.1% now to 10.2%.

The PRC has scheduled public hearings from Aug. 10-18. A final commission decision is expected in October, with five parties intervening in the case, said utility Vice President of Regulatory Affairs Tom Domme.

“We don’t anticipate major controversies,” Domme said. “It’s a pretty straight-forward case based on recovery of capital investments by the company.”