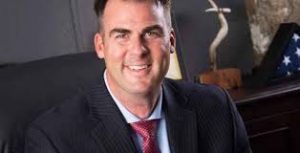 Oklahoma Gov. Kevin Stitt is promising there won’t be any surprises that might disrupt Tulsa’s high hopes of landing the new Tesla truck manufacturing plant. The city is one of two finalists for the plant and business leaders want nothing to interfere at the last minute for the city’s chances.

Tulsa’s bid for a Tesla factory won’t be eaten by a woolly-booger, Gov. Kevin Stitt promised Wednesday according to reporters Randy Krehbiel and Barbara Hoberock of the Tulsa World.

A woolly-booger, in legislative parlance, is a sort of surprise — something put into a bill that makes it all the way to the governor, and sometimes into law, without its true intent being generally realized.

This particular woolly-booger is a provision in Senate Bill 1595 that repeals the qualifications for Oklahoma’s Manufacturing Ad Valorem Tax Exemption, a business incentive particularly common in the Tulsa area and one apparently included in materials provided to Tesla.

Stitt had until Thursday evening to sign or veto SB 1595, or it becomes law at that time if he takes no action.

Either way, the governor said, the Tesla deal will not be affected.

“Regardless of what happens with that bill, Tesla and the package we put together for them is 100% safe,” Stitt said Wednesday afternoon. “We will honor our commitments. … Tesla was obviously offered that exemption in the package that commerce sent to them and then even if the bill is signed, Tesla would be safe.”

Area officials have been very tight-lipped about the Tesla bid, but an industry publication reported Tulsa and Austin, Texas, are the finalists for the plant, which will build the company’s new cybertrucks and could employ more than 10,000 people.

“The economic activity generated by the exemption has produced significant direct and indirect benefit to the state,” Neal wrote.

Tulsa County utilizes the program more than any county in terms of number of participants, with 30 in 2019. The exemptions range in size from a few thousand dollars to a few million, with Holly Frontier the largest beneficiary.

Tulsa County ranks third this year in total value of exemptions, behind Mayes and Garfield counties.

Stitt’s commerce secretary, Bixby banker Sean Kouplen, said he understands the reasoning behind the repeal provision but is leery of “stopping the entire program on a dime.”

“We are working on a number of large projects,” Kouplen said. “If (the exemption) goes away, those companies may decide to leave.”

The incentive allows certain businesses, including manufacturers, distributors and high-tech enterprises, to claim property tax exemptions on qualifying capital improvements for up to five years.

The taxes foregone are reimbursed by the state to the counties in which the businesses are located, with most of that money going to schools.

Most of that growth is attributable to two participants: wind energy and Google.

The incentive was among the factors driving proliferation of wind farms, particularly in western Oklahoma, during the 2010s. By 2013, wind energy accounted for half of all ad valorem reimbursements. The share dwindled thereafter but the value of reimbursements continued to climb, peaking at $60.5 million in 2018.

New wind turbines are no longer eligible for the exemption.

Google’s facility near Pryor is the reason wind’s share of exemptions declined even as the value went up. In 2020, the state reimbursed Mayes County for nearly $40 million in Google property taxes exempt under the program, or about one-fourth of the year’s total.

Since 2013, the state has paid $152.7 million in foregone Google property taxes.

That has made Mayes County the single largest recipient of ad valorem exemption reimbursements. While a few other businesses in the county receive the exemption, Google is by far the largest.

Click here to read more of the Tulsa World story.