Oil prices in US climb above $35 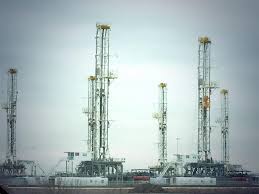 Oklahoma’s rig count remained a dismal 12 in the past week while nationwide, the number of oil and gas rigs continued their free fall, reaching only 301, meaning more and more rigs are in storage.

Baker Hughes reported Oklahoma’s count of 12 compares to the 102 rigs active in the state a year ago. Nationally, the count fell by 17 in the past week and in Canada, the count slipped by one to 20.

The US count included a loss of another 15 oil rigs, leaving only 222 active and a decline of two more gas rigs, with only 77 remaining.

Texas lost another 11 rigs leaving only 127 drilling for new oil and gas finds while a year ago, the state had 480 rigs. Colorado is down to only six rigs, same as a week ago while Louisiana remained at 35.

The Red Top Rig Report published by the Independent Oil and Gas Association in Wichita, Kansas reported only four rigs are active in Kansas, a drop of three in the past week.

New Mexico’s count slipped by two to 61, far from the 101 rigs reported one year earlier. North Dakota dropped two rigs leaving only 12 active in the state. Wyoming stayed at only two active rigs.

The Ardmore Woodford has only two rigs drilling in Oklahoma while the Arkoma Woodford bounced from no rigs to one rig.

The D-J Basin in Colorado has only 5 rigs while the Eagle Ford in South Texas remained at 22, far from the 75 a year ago.

The Granite Wash in western Oklahoma and the Texas Panhandle continued with only two rigs while the Mississippian still has no active rigs.

The Permian Basin of West Texas and southeastern New Mexico dropped by 14 rigs, leaving 148 active. A year ago, exploration in the large basin totaled 452 rigs.

The Williston in North Dakota lost two rigs and only 12 are active this week.