Millions in water grants and loans okayed by Water Resources Board 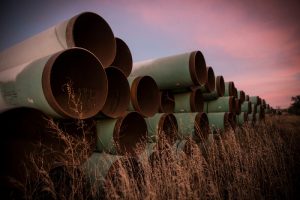 Protesters opposing the Trans Mountain pipeline expansion in Canada say they’ve canceled demonstrations and events due to Covid-19, and have increasingly depended on phone blitzes and social media campaigns.

But with work on big pipeline projects deemed essential, construction has continued through the pandemic, leaving activists to think about what on-the-ground actions they can take without risking their health according to POLITICO.

“It only takes one person to block a highway,” said Kanahus Manuel, a Secwepemc spokesperson for the Tiny House Warriors, a group opposed to the expansion of Trans Mountain. “If we stand down, it means our land is destroyed. … We still have big plans to stop this pipeline, and we’re going to stop it.”

Trans Mountain isn’t slowing its work, a spokesperson said, and it hasn’t experienced delays. The pipeline expansion is expected to be in service by December 2022. Meanwhile, TC Energy, the company building the Coastal GasLink pipeline, said the summer construction program is being finalized and will include “a measured and gradual ramp up of work over the coming weeks and months,” according to a spokesperson.

South of the border, opponents of TC Energy’s Keystone XL pipeline, which would deliver Alberta crude oil to U.S. markets, are grappling with how to proceed.

Judith LeBlanc, director of the Native Organizers Alliance and a member of the Caddo Tribe of Oklahoma, said internet access can be a barrier for many Indigenous protesters. “We have to be much more systematic and much more planned,” she said. “We can’t rely on spontaneity in a moment like this.” The spokesperson for TC Energy said construction on the Canadian portion of the Keystone XL pipeline will begin later this summer, with pre-construction activities continuing in the U.S.

Protesters aren’t only reckoning with limits on the types of activities they can organize — they’re also faced with a public that, these days, isn’t paying much attention. “The big thing is that it’s no longer the center of people’s minds,” said Jim Leyden of the Mountain Protectors, a group opposed to the Trans Mountain expansion. “We just really need to get that back on the front burner.”